The Kings of Clonmel
Halt's Peril

The Outcasts (officially Brotherband: The Outcasts) is the first book in the Brotherband series. It was published on November 1, 2011.

They are outcasts. Hal, Stig, and the other members of the brotherband - they are the boys the others want no part of. Skandians, as any reader of Ranger's Apprentice could tell you, are known for their size and strength. Not these boys. Yet that doesn't mean they don't have skills. And courage - which they will need every ounce of to do battle at sea against the other bands, the Wolves and the Sharks, in the ultimate race. The icy waters make for a treacherous playing field . . . especially when not everyone thinks of it as playing. John Flanagan, author of the international phenomenon Ranger's Apprentice, creates a new cast of characters to populate his world of Skandians and Araluens, a world millions of young readers around the world have come to know and admire. Full of seafaring adventures and epic battles, Book 1 of The Brotherband Chronicles is sure to thrill readers of Ranger's Apprentice while enticing a whole new generation just now discovering the books.

Six years later, when Karina, Mikkel's wife finds a drunk Thorn on her doorstep, she wakes him up by having her ten-year-old son Hal Mikkelson pour a bucket of water on "crazy old Thorn". Once Thorn wakes up, Karina talked sense into him to stop drinking and wasting his life away, then hires him to help around her eating house, teach Hal about being a warrior and to help him get prepared for brotherband training. Another six years, and Hal is almost 16 and is on his way to brotherband training. He shrugs it off and keeps walking. Thorn and Stig had become his best friends. He owns a boat, the Heron which he and Stig had continued building together with some help from Ingvar and the twins, Ulf and Wulf . When she was finally finished, they took her out to sea and was delighted that she performed wonderfully. She was even better than a typical Skandian wolfship because of the special triangular sails (shaped like a heron's wings; thus the name) he made for her.

When it is time for the boys to be sorted into Brotherbands, Tursgud and Rollond are immediately selected by their supporters and friends.

Hal and a group of boys that the other teams don't want are made into a third team by the oberjarl Erak, and Brotherband training begins! Ingvar helps decide the team's name and Hal's group all agrees to name themselves the Herons after Hal's ship. After a unanimous vote, Hal becomes their team skirl. The Herons then go to win the brotherband compititions.

For a full list of characters, see Category:The Outcasts Characters. 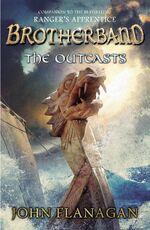 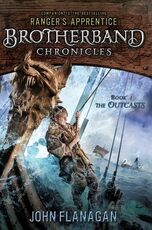 Czech language cover by Unknown
Add a photo to this gallery
Retrieved from "https://flanagan.fandom.com/wiki/The_Outcasts?oldid=46276"
Community content is available under CC-BY-SA unless otherwise noted.